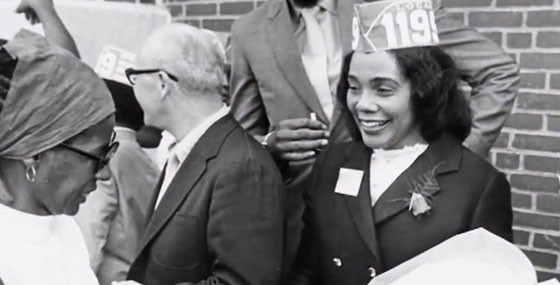 1199SEIU members from Johns Hopkins tell the story of how Coretta Scott King helped them form our union in Baltimore.

In 1969, just one year after Dr. Martin Luther King Jr. was slain in Memphis, Coretta Scott King came to Baltimore and helped the caregivers of Johns Hopkins win a better life by forming a union with 1199.

The decisive moment in that drive came in August 1969 when Mrs. King stood outside Hopkins on Monument Street and met with workers who’d wondered whether it was possible to organize one of the city’s largest and most powerful institutions.

But when the Hopkins caregivers showed up to work on that August day and saw Martin Luther King’s widow standing strong outside the hospital, they took heart. Hospital officials, facing the moral authority of Mrs. King and the emboldened workers, quickly recognized the union and negotiated substantial pay and benefit improvements.

Our Mothers’ March & Rally for Justice on May 10 honors the forty-fifth anniversary of Mrs. King’s work on our behalf. Now that Hopkins is working to turn back the clock and erase the gains she helped us make, it is more important than ever that we honor her legacy.

Hardship at Hopkins was a project of the 2,000 caregivers at Johns Hopkins Hospital united in 1199SEIU. It was the website for our 2014 contract campaign, which lifted standards for Hopkins caregivers and for healthcare workers across Baltimore.