It turns out you can rain on our parade — and it makes no difference at all. That’s what thousands of 1199SEIU caregivers proved on Saturday, May 10 at the Mother’s March & Rally for Justice at Johns Hopkins Hospital in Baltimore’s Inner Harbor. 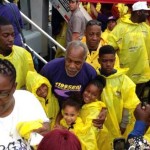 The huge crowd of Hopkins caregivers and supporters was joined by actor and activist Danny Glover and actor Wendell Pierce of The Wire. When Pierce began speaking, the skies opened. But as the rain poured down, determined 1199ers just pulled out their ponchos and, if anything, started cheering even more loudly for Pierce’s call to end poverty pay at Hopkins.

Though Hopkins is one of the world’s premier hospitals, many caregivers there make so little they need food stamps, Medicaid or other public assistance to get by. “I’ve been working at Hopkins for two years, but I’m also living in a homeless shelter,” Simone Hicks, an environmental services worker, told the estimated crowd of 3,500. 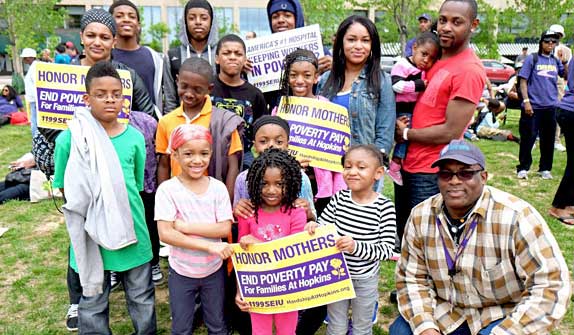 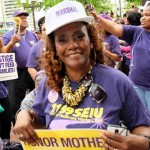 The 2,000 Hopkins service, maintenance and technical workers are fighting in ongoing contract talks to set a fair wage standard of $15 an hour. And on Saturday, they got some very high-profile help in that fight. In addition to Glover and Pierce, SEIU President Mary Kay Henry, SEIU Executive VP Gerry Hudson and 1199SEIU President George Gresham were all on hand.

And it wasn’t just Baltimore that heard our message. Johns Hopkins is a global institution, and so is our union. So even as we rallied in Baltimore, union supporters were stationed at Hopkins facilities in Panama and Brazil, as well as D.C. and Florida, to get the word out about the problem with poverty pay at Hopkins’ flagship hospital.

To learn more about the Hopkins fight, visit HardshipAtHopkins.org and follow the campaign on Twitter at @HardshipHopkins.

Hardship at Hopkins was a project of the 2,000 caregivers at Johns Hopkins Hospital united in 1199SEIU. It was the website for our 2014 contract campaign, which lifted standards for Hopkins caregivers and for healthcare workers across Baltimore.